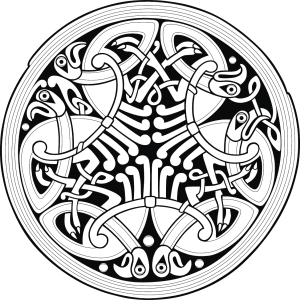 Tattoos can be seen in many different ways. Some people use them to express who they want to be, some people to express who they are and some only as they want to be fashionable. It is a known fact that Celtic tattoos are quite popular among today’s youngsters. The Celtic tattoo has the great power to reveal your intimate self thanks to the symbolism coming from an ancient culture and civilisation and sometimes it can be a real piece of art on your body,

Celtic tattoos as other tattoos are made by using needles to point ink into the skin. The Celtic tattoos are usually tattooed on ankle, shoulders, lower back and upper back area. They can take lesser time for being done compared to other kinds of tattoos because there are not many colours to apply. It is a known fact that these Celtic tattoos exist by thousands of years since Iron Age, and according to one theory perhaps since the Late Bronze Age Urnfield culture of Central Europe, which flourished from around 1200 BC. The tradition and mystique behind Celtic tattoos is what makes these types of tattoos very popular all over the world. Many rock stars and other celebrities have chosen this tattoo type for themselves.

There are many people who are scared to even think about getting a tattoo. This is because they think they will not be able to get a job or they will be seen with different eyes by the society. The art of tattooing was often misinterpreted as a prostitute and gang related thing. However, you should know that many of the tattoos are not a gang membership sign, but a normal thing exactly as it was thousands of years ago in many parts of the world.

You should always keep in mind that tattoos are made for life so you should carefully choose your design as you will not be able to change it afterwards. Besides this, you should not worry about not getting a job after you got your tattoo as almost nobody would select personnel using this criterion.

This website uses cookies to improve your experience while you navigate through the website. Out of these, the cookies that are categorized as necessary are stored on your browser as they are essential for the working of basic functionalities of the website. We also use third-party cookies that help us analyze and understand how you use this website. These cookies will be stored in your browser only with your consent. You also have the option to opt-out of these cookies. But opting out of some of these cookies may affect your browsing experience.
Necessary Always Enabled
Necessary cookies are absolutely essential for the website to function properly. This category only includes cookies that ensures basic functionalities and security features of the website. These cookies do not store any personal information.
Non-necessary
Any cookies that may not be particularly necessary for the website to function and is used specifically to collect user personal data via analytics, ads, other embedded contents are termed as non-necessary cookies. It is mandatory to procure user consent prior to running these cookies on your website.
SAVE & ACCEPT